Do Unto Other Businesses As You Would Do Unto Your Own 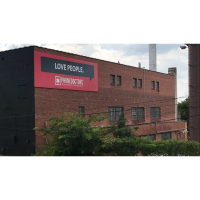 In a world full of hostile corporate takeovers and “crush the competition” mindsets, Tulsa based cell phone repair company, PHONEDOCTORS®, has chosen to buck the status quo. With the words “LOVE PEOPLE” emblazoned on their 4-story, modern and industrial, downtown corporate headquarters—Alex Iser and his team are staying true to the cause and practicing what they preach.

Approached in late Spring of this year by Jeremy Martin, President of TWO & A HALF WHITE GUYS. LLC DBA “FlamingoFix.com”— a Metro Tulsa, owned and operated, mobile repair business that can come to an individual’s home or office to repair broken iPhones, iPads, and Samsung Galaxy devices—Iser chose to embrace the competition instead of demolish it.

Iser, a life long man of faith and Martin, a life long volunteer in low income communities, spent the first 45 minutes of their initial meeting talking about what they loved most—helping other people. This connection lead Iser to look past his opportunity of self-starting their own mobile service and instead embrace Martin and his team’s young company. “We needed them way more then they needed us,” stated Martin. “Fortunately, Alex Iser thinks and operates on a different level.”

“We’re building a better mobile device repair and replacement company together and it takes a like-minded team to do it.  We want a better experience for customers, employees, and ourselves and this partnership is a testimony of another step in the right direction." Alex Iser, 14 year industry visionary and owner of 10 brick & mortar PHONEDOCTORS® locations, said of the partnership. In addition, Iser believes, "Great things take time to develop and when you find great people with focus in the same area, then work together if you can."

FlamingoFix.com will be rebranded as PHONEDOCTORS® MOBILE TECHS expanding the services that both companies previously offered, including, but not limited to: Cell Phone and Tablet Device Sales and Repairs, TV Delivery and Installation, and Home and Office IT Support—which will be available for customers in the next 12 months.

The alliance between the two former competitors was, “No less than a miracle,” according to Martin and his partners, Matthew Rolison and Eric Suire, Sr. “We are thrilled to form a partnership with such an established brand as PHONEDOCTORS®, lead by a man of faith and integrity, like Alex Iser. His humility and open mindedness to work with our team is what truly closed the deal. Both of our company’s approaches to serving and loving others have made negotiations and decisions very easy.”

PHONEDOCTORS® and TWO & A HALF WHITE GUYS have also committed to donate 10% of their joint venture’s profit to schools, churches, and worthwhile causes hoping to create educational, racial, and spiritual healing and growth in Tulsa and the surrounding communities.

The future looks bright for all.

Other Information:
PHONEDOCTORS® is a mobile device repair and replacement company that has been operating since 2004 and currently has 10 corporate locations (8 in the greater Tulsa area) and now extending its reach by launching PHONEDOCTORS® MOBILE TECHS to repair wherever the customer desires.